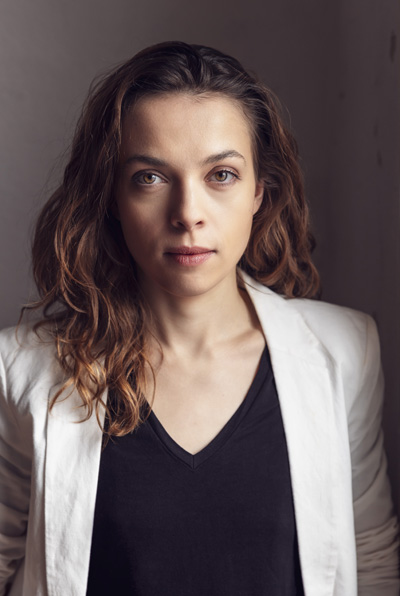 Director and Acting Coach in Berlin

After her studies in Ludwigsburg at the Academy of Performing Arts, under the direction of Luk Perceval, Amélie Tambour founded a space for Actors, Directors and Artists in Berlin, to study, explore and analyze the „Art Of Acting“. In her Theater Productions as well as in her Work at the Studio as a Teacher she is looking for honesty, empathy and courage. She puts the Actor into the focus of the work, creating a space where the freedom of acting can rise. A huge part of her philosophy is that an actor has to train the use of his instruments as well as a violinist does, who also never stops training. Mike Bernardin, whom she met at the Academy in Ludwigsburg, became her teacher in the Meisner Technique, mentor for her diploma project, still is an important guide and meanwhile became a colleague. After she first got in contact with the Meisner Technique, she startet to not only use this technique to train actors to become more human, alive and empathetic, but she also startet to develop theater plays using the Meisner Technique on stage. Since then she developed several shows with her Theater Company „Café Tambour“. In 2017 she met the actress and Alexander Technique teacher Annedore Kleist, who not only became a member of the Theater company but also startet to train actors at Studio Tambour in Alexander Technique. They both proved that the philosophy of Alexander is the embodiment of the Meisner Technique and that they go hand in hand in helping actors to become more free in their expression.

I had the honour to work on „Die Welt wird eine andere sein“ („Copilot“) a film by Anne Zohra Berrached, as an actingcoach with Canan Kir and Roger Azar. The Film had it‘s world premiere at the Berlinale 2021.

Having a nice chat with collegue Tim Garde about the Meisner Technique and it‘s impact on acting since it was developed by Sandy Meisner in the 1930s.